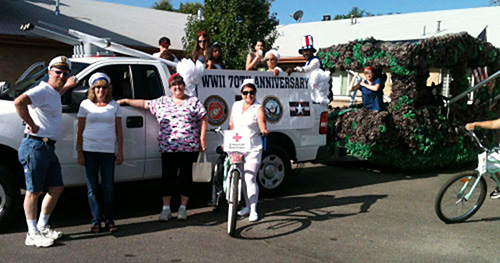 In this, the 46th year of the festival and parade, Sandalwood was awarded the Countess Award for the float which featured staff and residents dressed in patriotic garb.  Nurses rode along with the float costumed as American Red Cross workers.  Sandalwood has received numerous awards over the years for parade entries, and the awards are given in the form of decorative plates.

Drop by Sandalwood to see our display of award plates today!

You can learn more about the Wheat Ridge Carnation Festival here.

Sign up to Receive The Rehabilitation Center at Sandalwood's Articles on Senior Care, Company News & Upcoming Event Info, and connect with us on social media.

Careers at The Rehabilitation Center at Sandalwood

We are passionate about serving our residents and their families in a unique intersection of hospitality, wellness and healthcare.  Imagine the positive difference you can make each day on a senior’s life.